END_OF_DOCUMENT_TOKEN_TO_BE_REPLACED

I’ve done this tag before but it’s been a while so I thought it would be fun to do now that I am older and my shelves have changed. If you are interested in my original post of this tag I’ll link it HERE.

END_OF_DOCUMENT_TOKEN_TO_BE_REPLACED

It’s time for another Waiting on Wednesday! I haven’t done these in a long time but I really enjoyed them plus it’s a great way to talk about upcoming releases. So per usual I am tagging the amazing creator of this post/tag series breaking the spine.

This week’s spotlight is a book that I have been waiting for a long time. I am so excited that this book comes out soon. I loved the original Red Rising Trilogy so I cannot wait to finally read more from this incredible world. 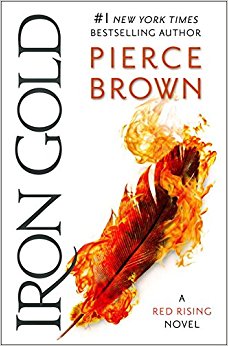 They call him father, liberator, warlord, Reaper. But he feels a boy as he falls toward the pale blue planet, his armor red, his army vast, his heart heavy. It is the tenth year of war and the thirty-second of his life.

A decade ago, Darrow was the hero of the revolution he believed would break the chains of the Society. But the Rising has shattered everything: Instead of peace and freedom, it has brought endless war. Now he must risk everything he has fought for on one last desperate mission. Darrow still believes he can save everyone, but can he save himself?

And throughout the worlds, other destinies entwine with Darrow’s to change his fate forever:

A young Red girl flees tragedy in her refugee camp and achieves for herself a new life she could never have imagined.

An ex-soldier broken by grief is forced to steal the most valuable thing in the galaxy—or pay with his life.

And Lysander au Lune, the heir in exile to the sovereign, wanders the stars with his mentor, Cassius, haunted by the loss of the world that Darrow transformed, and dreaming of what will rise from its ashes.

Red Rising was the story of the end of one universe, and Iron Goldis the story of the creation of a new one. Witness the beginning of a stunning new saga of tragedy and triumph from masterly New York Times bestselling author Pierce Brown.

It’s Tuesday again and I’m bringing back Tag Tuesday! I haven’t been posting much lately and I really want to get back into it and this is a good way. I was tagged by Dani @ perspectiveofawriter so go check out her blog! Thank you so much for the tag! For the books I’m choosing I tried to keep it to books I loved but there may be some that were good but not all time favorites.

END_OF_DOCUMENT_TOKEN_TO_BE_REPLACED

It’s Tuesday again and that means it’s time for another tag! I have been lucky enough to be tagged for a couple of tags recently so I’m slowly making my way through them. For this Tuesday I was tagged by @iamsurvivorblog, so thank you so much! What’s so cool about this week’s tag is that it is a book version of Truth or Dare which sounds insanely cool and a little scary. Was anyone else the person who always chose truth?

TRUTH: Answer the challenge questions as truthful as possible!

DARE:  If you choose not to accept the tag, you have to follow through on whatever dare the person who tags you chooses.

The dare given to me was to reread a book that you hate twice this month. Obviously I’m choosing to do the tag because there is no way that I could read Fallen by Lauren Kate 2x this month. Okay now that we have the rules, let’s get started?

END_OF_DOCUMENT_TOKEN_TO_BE_REPLACED

It’s time for another Tag Tuesday! I love doing these tags and today’s one is one that I saw on YouTube actually and it was posted by emmmabooks so I’ll link her channel here. This tag seems really interesting and since it’s just about the middle of the year I figured why not. So let’s get started!

END_OF_DOCUMENT_TOKEN_TO_BE_REPLACED

It’s tag time again! Yay! So I wasn’t actually tagged this time but it’s not going to stop me from doing it. I’m super excited because who doesn’t love Netflix?

END_OF_DOCUMENT_TOKEN_TO_BE_REPLACED

It’s another Tag Tuesday! And this time I was tagged by the book cover girls .You should go check out their blog. Anyways I’m super excited about this tag so let’s get started.

END_OF_DOCUMENT_TOKEN_TO_BE_REPLACED

It’s another Tag Tuesday day! This time I was actually tagged to do instead of me just deciding to it on my own. So thank you Katlyn from chaotic everything for tagging me.

END_OF_DOCUMENT_TOKEN_TO_BE_REPLACED

Thank you so much for tagging me Book Princess Reviews! I haven’t been tagged in one of these in a while and they are always so much fun so I’m really excited. This was created by okoto enigmas blog so everyone should go check out her page!